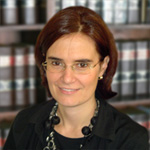 Claudia Vanney has a PhD in physics (Universidad de Buenos Aires, Argentina) and a PhD in philosophy (Universidad de Navarra, Spain). She is Director of the Institute of Philosophy at Universidad Austral. She has published several papers on the topics to be discussed in the project and she is also author of the book “Principios Reales y Conocimiento Matemático” [“Real Principles and Mathematical Knowledge”] (EUNSA 2008), where she attempts to account for the progressive rationality of scientific knowledge and also to reach a unitary vision of the cosmos. Her writings in the Philosophy of Science explore different elements in Aristotelian philosophy of causation, in which she finds potentiality to develop a Philosophy of Mathematics, of Physics and of Biology, in harmony with contemporary science. In recent works she has carried out a terminological analysis in order to discern the different ontological, epistemological and anthropological levels in the debate in determinism. See more.

Juan F. Franck has a PhD in philosophy (Internationale Akademie für Philosophie, Liechtenstein) and has done post-doctoral research in the US, Switzerland, Italy and Spain. He has published “From the Nature of the Mind to Personal Dignity” (CUA Press 2006) and a number of specialized articles. Between 2005 and 2010 he held a research position at Universidad Católica Argentina, where he focused on the problem of embodiment and on topics of the Theory of Knowledge. He joined the Institute of Philosophy in 2012 and focused on the Philosophy of Neurosciences. In his presentations and writings he tries to integrate different viewpoints (classical, modern, phenomenological, analytic) in order to approach the philosophical problems raised by the neurosciences. He also teaches Modern Philosophy at Universidad de Montevideo (Uruguay). See more.