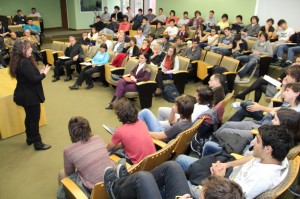 The First Interdisciplinary Research Week “Determinism and Indeterminism: From Physics to Philosophy” was held at Universidad Austral on August 5-9. This intensive Week was the main event scheduled for 2013 of a three-year project which endeavors to study the impact of new scientific findings in topics related to determinism/indeterminism in nature and to promote dialogue among Spanish-speaking physicists, biologists, neuroscientists, philosophers and theologians. This project is co-funded by the John Templeton Foundation, Universidad Austral and the Agencia Nacional Científica y Tecnológica.

The Week included several activities. Two keynotes for the general public were delivered: one by Dr. Olimpia Lombardi (Universidad de Buenos Aires, Argentina) called “What Indeterminism does Quantum Mechanics Propose?”, which was attended by over eighty undergraduate Engineering students; Prof. Juan Arana (Universidad de Sevilla, Spain) delivered the second one, which had the title: “The Multiple Faces of Determinism”. Besides, Luz Marina Duque (Universidad del Valle, Colombia) lectured to more than a hundred and twenty students of Biological Sciences about “Unity and Order in the Cosmos”. Prof. Arana also expanded on the historical context of the debate about determinism/indeterminism in an intensive course for academics.

The core of the Week was the workshop for researchers. Thirty researchers from seven countries participated in this event. The workshop consisted of six working sessions, two per day. Six carefully selected questions (one for every session) acted as small research sub-projects. Each question, previously studied by a physicist and a philosopher/theologian, was subject to an exchange of ideas among the participants during the workshop.

The methodology used during the Workshop fostered a deeper interdisciplinary dialogue and has paved the way towards a fruitful academic cooperation.